Using the shoreline between G and I on the map provided below, as well as the radiating purple arrows, an orientation can be established. That was where the city fell, where myth met matter, and prehistory met historical record. If there were survivors of the theopolis’s ruin, they would have needed shelter in the mountainous jungle environment, this as well as resources to ensure the needs of an expanding populace.

Over the ages, natives sought out those resources, exploring and experimenting with all manner of substances, and seeking the aid of beasts. Technology from Ankhara is also greatly prized, and whole orders are established to procure such articles from wherever they might be retrieved.

That is the thing about such a landscape, anything could be waiting in cave or on cliffside, and out of the many types of incredible relics or beings, perhaps the gods themselves are at play in some background beyond mortal sense of mind. The mystery of a mythical planet lays waiting to be colored in and explored. A place where creative obsession alongside the networking of minds can bring a secondary world to life. 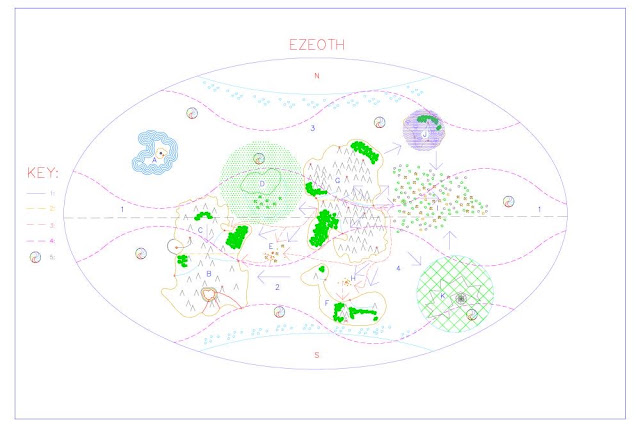 A: Sethraka: The Land of Tribulation

I: The United Islands of Zorthumu: A navel superpower

*note – The Global Key has been added in order to provide global data concerning planetology. This section concerns the purple arrows, with subsequent colors to be used in later posts.

Motherland to the Azori, a people who are said to have come from the stars. Now, in this later day, they have many great cities leading from where the mythical city is said to have crashed.

Using the planetary map and global key above, the global data concerning prehistory and migrations can be coordinated. In this case 1: on the global key as represented by purple arrows which show the origination point and spreading migration from that point.

Following the gradual migration of long ages, and the occasional mass exodus from disaster or war. Either way, the arrows lead to cities that are represented on the planetary map by small red dots. Trace these out and comparing them to the list of cities in the next section. This post is meant for getting a lay of the fictious land, preparing the mind for its interface/exploration with Ezeoth’s biosphere.

The High city of Astoz – west most

The Capital fortress city of Lejaz – east most

The High city of Ergmane – south most

The Port City of Esterpor – west most

The Mountain City of Ignsok – east most – jungle alchemists

Overwatch city of Gernswade – a beacon/lighthouse fortress on a mountain

The hollow mountain city of Kainarren – west most – flying beasts

The under kingdom of (mines) Norcelleon – subterranean

I: The United Islands of Zorthumu: A navel superpower

The capital city Oxeok – west most

Port city of Uyilos – west most

Port city of Kyilos – south most

Mountain city of Ehnsrah – north most

The port city of Angast – north most

The frozen port of Belgast – south most

The port city of Helmpot – exile city – west most

The port city of Beliahnshur – east most

The mountain city of Dejezul – west most

Oceanic City of Oglandum – on the water

The port city of Krahstomi – east most

The mountain city of Xecmor – south most

The Foundry City of Drahg – at the foot of

The port city of Olnahee – west most

The great city of Ilsahneece

Knowledge of geodetic cartography and environmental engineering can illuminate much and be used as a marvelous tool for data storage, and to those who know-how, it may be used to unlock whole words of vital ecology. Using the obsessive imagination and creative workshopping, and letting the unconscious mind access Geology and oceanology, the whole thing interfacing with biochemistry and climatology in order to bring about a planetscape to be explored.

This is the very essence of the JWC SW exercise and how it can bring your story setting to vibrancy and fullness. Use this to weave the tale of legendary journeys for your sentient organisms (races, species, models) to their landmark settlements, those well-established cities where civilization took root.

In this example, these cities can be found by zooming in and coordinating all red dots with the boundary description. When you orient by continent, region, city, and the landscape of mountains, rivers, and shorelines, it is easy to see the world start to come to life.

Seek as much “world” as you need to accomplish the tale, without fear of overwriting, while at the same time seeking clarity of awareness and mystery of consciousness. It is better to have a whole planet turning in your unconscious than just a solitary region bordered by the oblivion of incompletion.

Each red dot is a city, a place along an ancient migratory route. A city can be the heart of a people, and through this a collective race can be pieced together. In all these cities live millions of people, since they represent the most populated zones. It is assumed that the land is filled with lesser dwelling places and peoples, and these are prosperous and yet less able to weather crises.

(Ezeoth is called storm world for a reason, the weather and climate being wild like it is. Meteorology will be gone over in a subsequent post, because its impact to story setting and narrative is profound.)

When a community is challenged by adverse conditions brought on by disaster, catastrophe, or war, they must set aside pride and discontent to survive. A nation or region can be reckoned the same way, able to rise and fall based on disunities, or the leadership of a few distinct individuals. Upon these special citizens falls the fated names and places that make a past, present, and future in which your tale unfolds.

As you build the secondary world a realm of orignition and ceaseless marveling blooms like a flower in the dawn. Let this exercise define and redefine your own personal secondary world, a place where your creative obsession takes you, that pure thoughtspace of mind theater apart from all adaptive concerns. There your sacred tales may be properly framed.